Apprenticed to Venus: My Secret Life with Anaïs Nin

“Getting to know lust, love, and Anaïs Nin….In 1962, Rainer (Your Life as Story, 1997, etc.) met Cuban-born Nin, the noted diarist, while on an errand for her godmother…So begins her spicy and saucy hybrid of memoir and novel…. Over the next 15 years… she became a close friend and mentor to Rainer(and) Rainer became a devotee of Nin’s philosophy of life: “A woman has an equal right to pleasure as a man.”…Over time, she realized that Nin was a “deeply flawed person—a narcissist, a bigamist, a liar, and a deviant,” but she was also “so lovable.” Feminists and fans of Nin’s work will enjoy this unique insider’s portrait…”
—KIRKUS

“Mysterious, glamorous, intellectual: these are all words that come to mind when the writer Anaïs Nin’s myth is evoked. But rarely have fans had an unchaperoned glimpse inside her life. …When she entered Nin’s apartment, Rainer was immediately enraptured by the rich life she saw around her and the secrets that lay just below the surface…with vivid language and lush scenes, this memoir makes an exciting read.”
—THE BUST GUIDE / BOOKS

“Tristine Rainer shares her complicated relationship with a famed writer in Apprenticed to Venus…Rainer was just 18 when they met, and Nin took her under her wing, acting as a mentor. There was good and bad to the friendship, though, making it all the more fascinating.”
—BUSTLE “Best Non-Fiction”

“Rainer, who became an expert on diaries and memoir, candidly and vividly recounts her role in Nin’s astoundingly duplicitous life in an irresistible mix of fact, memory, and storytelling she calls a “novoir.” Along with fresh insights into gender roles, Rainer offers stunning revelations about the publication of Nin’s cagily edited diaries and the misplaced reverence the writer accrued as a feminist icon. Describing Nin as “brave and dishonest” and “a visionary of life itself as imaginary theater” Rainer brings this “artist/goddess” who wrote “to taste life twice” into sharper focus…”
—BOOKLIST, July 1, 2017

“There are fateful decisions which mark one for life. Young Tristine Rainer’s first encounter with charismatic, enigmatic Anaïs Nin unfolds into a decades-long apprenticeship suspenseful as a thriller. The advantages and perils of a mentor/apprentice relationship with such a seductive, brilliant and dangerous mentor is absolutely spellbinding. Revelations, especially toward the end of the book, changed my understanding of the Nin story.”
—JANET FITCH, New York Times bestselling author of White Oleander and Paint It Black

“This is one of those delicious memoirs one can’t stop reading. And who could resist Nin herself, that flamboyant and sexually compulsive diva, a key figure in the women’s movement, a complex artist who made her own life into her most arresting work of art? Tristine Rainer takes us into the hot pulsing heart of Nin’s world. Better her than me. But she has lived to tell the tale, and it’s an alluring as well as compulsively readable story.”
—JAY PARINI, Author of Empire of Self: A Life of Gore Vidal

Apprenticed to Venus: My Secret Life with Anaïs Nin

Tristine Rainer will be giving the keynote talk at the 805 Writers’ Conference Saturday, May 19 from 10 AM to noon. She will speak on memoir writing and her own ups and downs of writing and publishing Apprenticed to Venus in 2017. 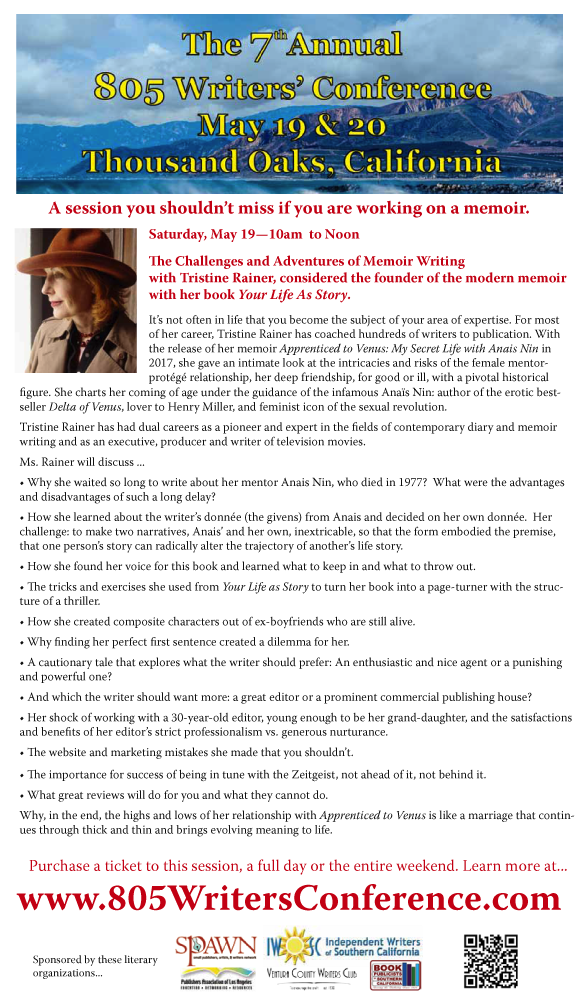